Our convenient and friendly West Hartford Center office location enables us to give our clients the service they require.

John Bonee’s clients have always been his primary focus on any case upon which he has the privilege of working for them. 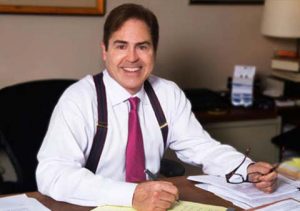 He finds great satisfaction in helping individuals with real legal problems of a personal nature. With over thirty years of experience, he has focused on civil trial work, estate administration, wills and trusts, and collaborative family/matrimonial litigation. His breadth of experience is extensive, from working to protect an “adopted out” woman’s stake in a fifty million dollar plus trust, to successfully arbitrating more than a million dollars in compensation for a young man who suffered from debilitating injuries in a motorcycle accident, John vigorously pursues his clients' cases to help them achieve the justice they deserve.

John’s pursuit of the best results for his clients and his strong loyalty to them have given him the privilege of being retained for some unusual quests. For example, he represented the administrators of an estate in which the decedent had purchased an unauthenticated work of art for $3 at a tag sale, which was later stolen from the estate and then demonstrated to be by a famous artist. He and his firm brought suit for recovery, which led to complex litigation over approximately ten years and ultimately a mediated settlement of a seven-figure amount to the estate. Also, related claims, tax issues and administrative accountings had to be tackled – all just an example of the nature of the varied but dedicated work that John and his partners at BoneeWeintraub LLC do for their clients.

In addition to his practice involved in complex civil and probate litigation, including personal injury and will contests, John has for decades assisted clients with their needs for collaborative dissolutions of marriage and related family law matters. He, as a prior corporation counsel for the Town of West Hartford, has had extensive experience with municipal zoning and planning issues and administrative appeals. He is admitted to practice before state and federal courts in Connecticut, U.S. Court of Appeals for the Second Circuit and the U.S. Supreme Court.

Although he has devoted himself to his extremely busy law practice and the pursuit of excellence for his clients' cases and concerns, John has always felt a strong need to be of service to his community and to the various associations which educate and govern his profession and his fellow practicing attorneys in Connecticut and Hartford County. Hence, he has been elected by his peers to serve on the Connecticut Bar Association’s Board of Governors and House of Delegates for almost two decades, and he is a member of the Connecticut Bar Association’s Standing Committee on Professionalism/Continuing Legal Education, and a member of its Probate, Litigation and Family Law Sections. He has been chosen to be a Cooper Fellow in the Connecticut Bar Foundation and a member of the American Bar Association’s Bar Foundation. A past president of the Hartford County Bar Association, he has been a leader in its initiatives with respect to professionalism conferences for his fellow attorneys. He is a former elected member of the West Hartford Town Council, the Community Planning Advisory Committee of West Hartford, West Hartford Board of Education and has served as Corporation Counsel for the Town of West Hartford. John is listed in Marquis Who’s Who in American Law and America, he has authored numerous articles on various issues in the law, and in April 2011 was named one of Greater Hartford’s top attorneys in the personal injury field by Hartford Magazine. He has served on various charitable/non-profit boards for the benefit of his community during his career.

A Hartford native, John has resided in the Town of West Hartford throughout his professional career. Following the tradition of service by lawyers to their clients and community set by his grandfather and continued by his late father, John understands the importance of using his broad legal experience to benefit his clients and those in need of help.

John has had a life-long commitment to his own education through bar association leadership activities, state, national and local, and constant attention to continuing legal education attendance at seminars in his fields of expertise. In addition, he has given his professional skills to further education in his community through volunteer work on his local board of education, town council, bar associations, and cable TV station. He is a graduate of the Loomis Chaffee School, Trinity College/Hartford (B.A. History), and Suffolk University Law School (J.D.); additional work/study: Makerere University, in Kampala, Uganda; and The Hague Academy of International Law.